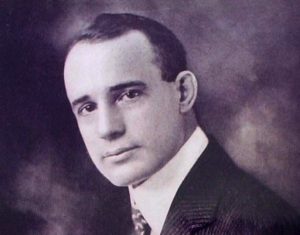 Chuck Bartok, the creator of the Focus Society Mastermind (material connection), has released another free version of Think and Grow Rich, both in audiobook and ebook format.

If you are are a regular reader of Free Personal Development Material, then you are familiar with Chuck and the Focus Society Mastermind. He’s provided massive amounts of material to assist people in creating the lives they want. His weekly discussion of personal development classics has included The Science of Getting Rich by Wallace Wattles, The Master Key System by Charles Haanel, The Miracle of Right Thought by Orison Swett Marden, The Power of Your Subconscious Mind by Joseph Murphy, and (of course) Think and Grow Rich by Napoleon Hill.

You can access the current and previous discussions of all of these books on the Focus Society Mastermind’s Talk Shoe page.

But back to the free audiobook…

Chuck has set this up in an interesting way.

Then, every two days, you’ll receive another chapter of the audiobook, until you’ve received all of the chapters of the book.

I’m listening to the first chapter as I write this – it’s a audio perfect, professional recording. I don’t think you’ll want to miss this.

Click here for more information and to access the mp3 audiobook and pdf ebook version of Think and Grow Rich by Napoleon Hill (name and email address required).

Thank you, Chuck… you and your work really are a blessing to the world.

My friend Vickie from Contemplate This recently had a video she created selected by Jerry and Esther Hicks and featured on their video page: Get Happy. Abraham-Hicks Law of Attraction

The video really captures the essence of Abraham’s teachings, and whether you believe in the whole “channeling” thing or not, the message is one that people need to hear. While she wasn’t the first person to mention Abraham to me, Vickie is the person who taught me to listen to their message and that it really is OK, no, essential to be happy.

My favorite line of the audio (Abraham speaking through Esther Hicks) starts at exactly 2:00 – be sure not to miss it!

Thanks for putting this out there, Vickie… and congrats! 🙂

So I’m looking around my office tonight for a book to give away this week, and the one my eyes stop on is a perfect match: The Greatest Salesman in the World Part II – The End of the Story by Og Mandino.

It’s a perfect match, because one of the ideas in the book is about the offering of Free Personal Development Material.

In this book, Hafid (the “Greatest Salesman”) is now rich. He has begun to charge for speaking engagements in which he shares his secrets of success. He is also very generous with his wealth: feeding, clothing, and sheltering the poor. But, after a conversation with his friend Sergius, he decides to start doing things a little differently:

“Like all other orators, you are charging admission for your speeches and so those who need your message the most do not hear it because they are too poor to attend. They are the same people you now feed and clothe. Change your procedure.”

Sergius then suggests that he begin to speak for free.

“Free? There will be many who will attend only to be entertained or to pass the time of day with no thought of learning how to improve their lot in life.”

To which Sergius says:

“You are correct, without a doubt. Many men of great intellect insist that unless one has to pay or work hard for something, one never fully appreciates it. However, for all of those in your audiences on whom your words will probably be wasted, just imagine how satisfying it would be to you if you learned that there was at least one poor camel boy or street urchin in the crowd whose life might commence to take an upward path because of your words.”

That’s a very brief overview… but you get the point.

I couldn’t find a better book for a giveaway.

But I looked at my copy, and it was in bad shape. And I wondered if someone would want to read part two, if they haven’t read part one.

So… (yes, I’m finally getting to the point here…)

I’ll ship them to anywhere in the world that Amazon is willing to send them.

In order to enter, first follow me on Twitter. I’ve had to add this step in order to communicate with the entrants – feel free to unfollow once the giveaway is over.

Even if you personally don’t want the books, feel free to enter if there’s someone you know who could use them, or just spread the word using the TweetMeme or ShareThis buttons below the post.

Thanks for reading and participating!

The BeliefBusters First Aid Kit by John Milton Fogg is one of them.

Part of my process for determining what to post here and what not to involves collecting both submissions and my own finds and putting them in draft format, then taking a block to time to batch through them and determine what to post now, what to post later, and what to post never (those last ones go straight to the trash).

This should have been a now, but somehow ended up in the later file.

I’ve written about John Milton Fogg’s work before – if you haven’t already seen his Greatest Networker ebook and audio, I’d highly recommend those as well.

But for now, be sure to take a look at his BeliefBusters First Aid Kit – it’s a short pdf (18 pages), but packed with techniques to help you combat what he calls “THE source of ALL physical, mental, emotional and spiritual disease on Earth […] the pathogen of Negative Beliefs.”

Some of the techniques may be familiar to you, and some may be brand new.

But here’s a question for you – how many techniques are “familiar” to you, that you’ve used in the past with good results… and then stopped using for no good reason?

Could that be because of a negative belief about your own worthiness for success?